XAVIER BOARD OF HIGHER EDUCATION IN INDIA (XBHEI) 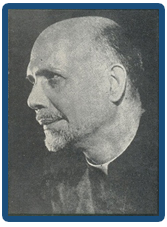 Rev. Fr. JEROME D’ SOUZA, SJ Indian (1897 – 1977). Jerome was the second of four brothers and one sister who was the youngest. From his earliest years “Jerome was the most alert and intelligent (of the children), but also the most difficult to bring up,” as his sister Apostolic Carmelite would testify. In school Jerome was not studious, but very intelligent and from a very young age, a voracious reader. He had a strong aversion to strict discipline and was unpredictable in his ways and behavior, and ever ready for mischief and adventure. He was extraordinarily lively and friendly, and had a remarkable ability to make friends. Jerome showed an astounding flavor for languages. In his youth he could speak seven: Konkani, Marathi, Tulu, Hindi, Urdu, Kannada and English. Later on he learnt Tamil and number of European languages.

After Jerome finished his studies in the local school, he went to St. Aloysius College, Mangalore. From there he went to St. Joseph’s Tiruchirapalli, and finally to the presidency college, Chennai, where he finished his B.A Honors with a first class first. After his graduation he went back to St. Joseph’s as a lecturer. The example of the Fathers in the college stirred something within him, and after a discernment Retreat he joined the Novitiate of the Society of Jesus on May 28, 1921. The Novitiate was not an easy time for him. He struggled with temptations and depressions and used to accuse himself of the “deep rooted pride of my nature.” In 1926, after Jerome finished his Novitiate and philosophy, in 1928 he was sent to Belgium for his theological studies. He was ordained priest on August30, 1931.Jerome finished his 4th year theology and his Tertianship in France.

He was appointed to his old Alma Mater, St. Joseph’s College, Tiruchirappalli. After a little more than a year he was appointed its principal to his own surprise and to every one else’s. This period marks the beginning of Jerome’s contacts with political personalities like Sri C Rajagopalachari, Jawaharlal Nehru and many others, with whom he made friends. In April 1938; Jerome was named its Rector, the first Indian to be named. What helped him most in all this were his courage, optimism and total trust in God. He proved himself to be a man of remarkable learning, administrative capacity, and deep insight into human nature, large- hearted sympathy, bold vision and driving force. Since Loyola College, Chennai very badly needed a change in leadership Fr. Jerome was transferred to Chennai in the year 1942 and took over both Rector and principal again first Indian to be given such a responsibility.

Besides his many duties in Loyola, many other demands were made on him. Jerome became the member of the War Reconstruction committee, especially in the planning of the post war Education. In 1946 he was appointed by Madras University to form a part of the Decennial Inspection Commission. Jerome was made a Member of the Constituent Assembly which had to frame the Indian Constitution. This was the unique task for a Christian and a Jesuit. He worked from 1946 to 1949. As soon as the Constitution was framed he resigned immediately though the Assembly continued. In the second sitting of the assembly in January 1947, Jerome made an impassioned plea for balancing carefully the Rights of a Minority Community with the imperative need to build an integrated Nation. He played a key role in the discussion and final passing of Article 25 that guarantees a Fundamental Right, Freedom of Conscience and the Right freely to profess, practice and propagate religion.

He also made as important contribution to the whole question of Minority Rights. In 1949 Jerome was nominated by the Prime Minister Jawaharlal Nehru, to be one of the five members of the Indian Delegation to the General Assembly of the United Nations. He attended four such sessions: the first in 1949, second in 1951-1952, the third in 1955 and the fourth in 1957. During this period in 1951 he established Xavier Board of Higher Education in India. In the same year 1951 Fr. General asked him to start a social institute in Pune to deal with the many social problems of India, and the new venture was launched with the name Indian Institute of Social Order which was later changed to Indian Social Institute (ISI).Jerome attended the session of the UNESCO to which the Government of India had appointed him as an Adviser.

The session lasted till December 1956. In January 1957 Jerome was elected by the 30th General Congregation of the society of Jesuit , General Assistance to Fr. General. This appointment lasted till 1968. His stay in Rome was very enriching and put him in contact with great personalities of the church. In a meeting of Jesuit Rectors and principals of Jesuit colleges held in Bandra he emphasized: “Balance between our educational and missionary work, diversifying educational work by increasing attention to technical training in industrial and agricultural fields, direct apostolate among workers.”

The Vatican made Jerome a Member of the Ecclesiastical Commission for the Permanent Committee of International Congresses; Consultor of the Sacred Congregation of the Propagation of the Faith; Member of the Pontifical Commission for Mission. These appointments involved a great deal of Meeting and Correspondence with the Pope, Bishops, Papal Nuncios and Religious superiors all over the world.

“Fr. Jerome D’ Souza SJ was a man of dignified bearing who even before he spoke a word, caused you to expect to hear words of wisdom, and you were never disappointed… His words always revealed an honest mind and a kind heart, although his whole personality would, on first meeting, cause one to stand in awe, yet upon deeper acquaintance, you discovered a youthful buoyancy and simplicity which charmed you ,caused you to love him as a brother. He retired to Loyola College, Chennai; gradually he grew worse until on August 12, 1977 at around 12 midnight, he rendered his soul to the Lord. In 1997, on the Centenary of his birth, the Indian Government issued a POSTAL STAMP in his honour showing his portrait. 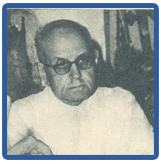 Father Melchior M. Balaguer, SJ There will surely be a place for Father M. M. Balaguer in any comprehensive history of the Society of Jesus or the Catholic Church in Bombay and in India. And whatever may be said of him, no one will deny that he was a special sort of ways, and in some respects remarkably different from others. Father Balaguer joined St. Xavier’s College in 1937 as an urgently required reinforcement for all its academic and

administrative competence was losing touch with the mass of the students and had little influence on the Catholics, soon Balaguer’s special genius was discovered by Archbishop Roberts, who had himself arrived on the scene in 1937 and took him as his Vicar General to help in the daunting task of bringing Bombay well out of the Padroado age, and then beyond the colonial period.

The new VG displayed great qualities, had a sweeping vision and inexhaustible stamina, as well as the intelligence to plan on a large scale, and a tremendous will to see a project through to the end. Came Independence and with a year’s sabbatical during which he picked up a working knowledge of Hindi, Balaguer was appointed Principal of St. Xavier’s college in 1949. That was a job after his own heart, when the Nation was gripped by the fascinating dream of a new India as a sovereign democratic Republic; and he did not miss the many opportunities that were his for nine years. Former students remember him with awe and affection, recalling his many genial innovations – and his yearly feat of sitting uninterruptedly at his desk from early morning to late evening, day after weary day.

On leaving St. Xavier’s he was quite willing to occupy much smaller, even rather obscure, posts – to which he dutifully gave of his best, as always. Three mammoth national events were entrusted to him as Secretary-General of the Xavier Board of Higher education in India, he steered them through from timed speculation to a grand finale: the International Eucharistic Congress in 1964, which was graced by the visit of Pope Paul VI; and the Church in India Seminar in 1969, meant as a follow-up of the Second Vatican Council.

Finally, his services were sough t for Andhra, to set up a communications centre, and Secunderabad became his base for the last phase of his life, much of which was spent in directing retreats and advising on various committees.

And that is where his popularity as a public figure will rest: on his ability to share his bright and bold ideas and his boundless optimism, in a consultative capacity with no executive clout. That is also how Bombay Jesuits will long remember him, as an inspiring speaker at the conclusion of so many successive Province Days. 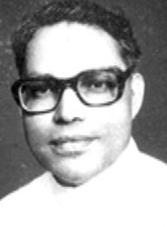 Rev. Dr. John Vallamattam was born on Feb. 10, 1931 at Thottakara, Ernakulam Dist. He had his school education at St. George Primary School, Thottakara and Infant Jesus High School, Vazhakulam. He was ordained Priest in 1956 after having had training at the Sacred Heart Seminary, Ernakulam and at the Pontifical Athanaeum, Kandy, Sri Lanka and Pune. He obtained a degree in M.A. History from University of Kerala, and M.A. Public Administration from Rajasthan University. He also held a Ph.D. in Education from Wilheims University, Muenster, Germany. He was an Educationist and journalistpar excellence.

He was appointed Lecturer in Logic and History at Newman College Thodupuzha in 1964 and continued till his appointment as Principal of Nirmala College in 1977. His services to higher education were unique.He was Higher Education Secretary, Diocese of Kothamangalam (1964 – 1999).

His literary pursuits include ‘Judgements on Minority Rights’ (in two volumes) and ‘Indian Christian Handbook’. He was called to eternal rest on Sept. 19, 2005.

Father Veliparambila friend once stated that Fr. John Valamattamwas “multi-faceted in its true sense,” skilled as an organizer, legal consultant, educator, demographer, facilitator and trouble-shooter in conflict situations. “And he did all these with great accuracy,” he added.

His remarkable contributions to the educational field and to the Christian community will be ever remembered. 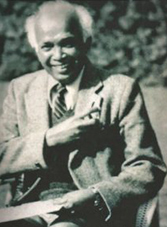 Dr. V. V. John’s professional life began soon after he completed his M.A. (in English Literature) at Oxford University, in 1936. Over the next sixteen years, he taught at Universities in Kerala and Orissa. In 1950 , Dr. V.V. John became the Principal of Government College, Ajmer. In 1962, he was appointed Director of Education, Govt. of Rajasthan. He held the position of Vice – Chancellor of the Jai Narain Vyas University, Jodhpur also known as University of Jodhpur from 1969 to 1972. He was also a member of the Minorities Commission during Morarji Desai’s premiership. He served Xavier Board of Higher Education as its President from 1983 -1986.

Dr. John’s serious engagement in Journalism began in the mid-fifties of the last century. His articles began to appear regularly in the Hindustan Times, the Times of India and the Statesman and attracted wide attention. His flair for Oratory made him enormously popular in the lecture – circuit. Doyens of the Corporate World in Mumbai chortled to the wit and humour that distinguished / marked all his lectures.

Nissim Ezekeil gathered some of them into a book. Other collections followed : Orbiting Professor, Light Luggage, Plato’s Indian Republic, The Great Classroom Hoax, to name a few.

A few years before his passing away, Prof. John was knighted by the Vatican.

Xavier Board of Higher Education in India,
No 31, Primrose Road,
Bangalore, Karnataka - 560025.

How to Reach Us

Copyright © 2021 Xavier Board of Higher Education in India, All Rights Reserved. | Powered by Boscosoft Technologies